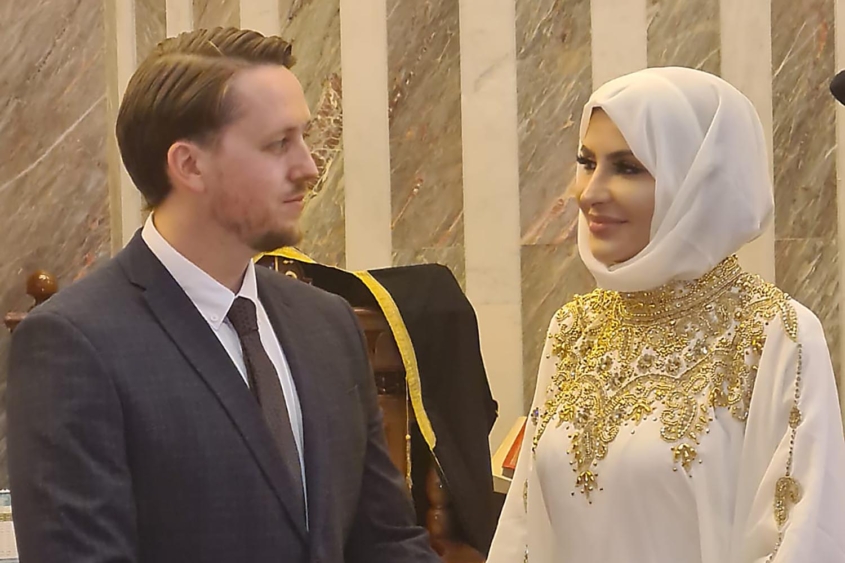 Muslim worshippers across the world are celebrating Eid al-Fitr to mark the end of the holy month of Ramadan, a faithful fast from dawn to dusk.

DGP’s Project Manager, Euan Campbell, who converted to the Islam faith, gives an insight into his own experience.

“Aside from Eid, that I don’t have much experience in, I started fasting at the start of Ramadan, although because I needed to take some medication, I had to stop fasting part way through. My wife, Amira and I plan to complete some fasting another time in the year when we can to make up for the lost time. It is also said that for any day of fasting that you are unable to perform, one should give extra Zakat – the act of giving to the poor. Zakat is already 1 of the 5 pillars of Islam but Amira and I wanted to go the extra mile in giving a set portion of the money made in our business and we also wanted to create a charitable page for others to donate to a fund that is close to Amira’s heart – Syrian Widows and Orphans as a result of the ongoing war in Syria. Unfortunately, none of the known charitable pages would accept the creation of such a page and so we have not been able to make it yet, but we do intend on finding a way and I will send out a separate email at some point for anyone who might wish to donate.

In terms of my journey in becoming Muslim, without going into too much detail.

I became a Muslim for a somewhat selfish reason – so that I could marry Amira and be part of her wider family. I was not a religious person at this stage, having never been baptised and never followed any religion, but I followed the steps that included a long discussion with a Sheikh, the recitation of the Shahada and confirming that I would follow Islam and the guidance brought with it. I didn’t truly start to follow Islam for another year or so, living my life as I was before with not much thought being giving to it.

However, more recently I have started to learn there is more to being a Muslim than the things we tend to see in the Western world. I learnt how to pray, reciting the Surahs and Duas in Arabic, read the Quran, and I started to seek knowledge from books, videos, Sheikhs and fellow Muslims. As I did, I found that much of what is plucked out of the religion and is the knowledge of the otherwise uneducated Westerner is taken out of context and/or is skewed to show Muslims in a negative light. I learnt that so much of Islam is about how to be a good person in this world and how to treat others with fairness, kindness and dignity. As I began to follow the path of Islam, I realised that it is not about me having to give things up (not eating certain foods, my time for prayer, etc.) but actually that Islam gives to me. By reading and listening to literature and the words of others I have found myself learning much about the world, and myself, that I can implement in my own life and can help me to achieve inner peace. By accepting that Allah and his angels are watching over me, it is easier to not feel afraid or unsure in new paths being taken.

I am inherently a logical person, Engineering being my basis, and I have been surprised by the logical nature of Islam and how the teaching can actually help me to understand things in this world just as well as a related science would. I still have a lot to learn, but I have found the learning to be fulfilling and enjoyable.”

Visit us on Linkedin and follow our company page.
Happy Earth Day from DGP

This site uses cookies. By continuing to browse the site, you are agreeing to our use of cookies.

We may request cookies to be set on your device. We use cookies to let us know when you visit our websites, how you interact with us, to enrich your user experience, and to customize your relationship with our website.

Click on the different category headings to find out more. You can also change some of your preferences. Note that blocking some types of cookies may impact your experience on our websites and the services we are able to offer.

These cookies are strictly necessary to provide you with services available through our website and to use some of its features.

Because these cookies are strictly necessary to deliver the website, refusing them will have impact how our site functions. You always can block or delete cookies by changing your browser settings and force blocking all cookies on this website. But this will always prompt you to accept/refuse cookies when revisiting our site.

We fully respect if you want to refuse cookies but to avoid asking you again and again kindly allow us to store a cookie for that. You are free to opt out any time or opt in for other cookies to get a better experience. If you refuse cookies we will remove all set cookies in our domain.

We provide you with a list of stored cookies on your computer in our domain so you can check what we stored. Due to security reasons we are not able to show or modify cookies from other domains. You can check these in your browser security settings.

These cookies collect information that is used either in aggregate form to help us understand how our website is being used or how effective our marketing campaigns are, or to help us customize our website and application for you in order to enhance your experience.

If you do not want that we track your visit to our site you can disable tracking in your browser here:

We also use different external services like Google Webfonts, Google Maps, and external Video providers. Since these providers may collect personal data like your IP address we allow you to block them here. Please be aware that this might heavily reduce the functionality and appearance of our site. Changes will take effect once you reload the page.

The following cookies are also needed - You can choose if you want to allow them: